☾ Pluck the Moon out of the sky ☾

This coin of Earth's Moon features a geographically (technically it's selenographically) correct 91,196,160:1 scale design of the surface texture of both its near and far side. A great worry coin, gift, or reminder coin.

The coloring/patina process is done by hand, and it is both an art and a science so coins will vary slightly. Coins are struck one at a time in the USA using antique machinery and traditional coining techniques.

Note—Each order comes packed with a handwritten envelope straight from Shire Post Mint. We will make this out to whoever is on the SHIPPING ADDRESS. If you are giving this as a gift and would like a different name on the envelope, please include the recipient's name in the Special Instructions field as you complete your order.

I got this coin as a 3rd year sobriety chit for myself. I never cared for AA but loved the chits. The way it was delivered blew my mind. It was like receiving a letter from Hogwarts. The coin came in a hand addressed wax sealed letter which made receiving it a lot more special. I love the weight of the coin and the detail is just wonderful. I bought this as a gift to my self to remind my self to stay strong this year, but I feel this will last me the rest of my life.

R
Ryan Horst
Out of this world

I’d seen the pictures. I’d read the reviews. But holding a 1oz .999FS scale replica of our moon in my hand was a VERY cool feeling. Only gripe: I wish it was a Troy ounce. 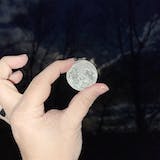 Even though I was initially longing for the large silver moon, in my mind I couldn’t justify the price and so I settled for the large brass instead. After being blown away by the craftsmanship, but disappointed at the weathering it took after only a week of carrying it around in my pocket, I decided to snag the large silver moon and pop it into an 85 cent airtight capsule with the slight black ring. It does the trick perfectly. Now I can carry it around all day without fear of damage and it never loses it’s beautiful shine. I actually quite enjoy the black ring capsule as it gives the beautiful illusion of the moon being permanently suspended in space. This is infinitely better than any fidget spinner and exquisitely produced. I would definitely recommend the large silver over any other medium as it so perfectly reflects the natural color of the moon. Also - drop another dollar and get yourself a capsule for it - you won’t regret it. 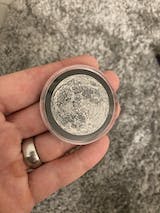 I had purchased the smaller silver moon coin previously, and decided to go for the larger size. I really like the larger size as my hands are big. Detail is there and looks great in the silver. Has a nice sound to it when flipped with your thumb. Really nice to add to the vast collection. Highly recommended!!

The coin has deep reliefs that will wear nicely over time. This is good as I keep mine in my pocket and use it as a worry stone. Very soothing to handle, size and weight are perfect for my hand. If you're prone to fidgeting it's a great thing to have in your pocket.